Release Day Celebration: The Pacifist by Jenny Holiday...Review and Giveaway!

She’s done holding her peace…
Out Oct 25th – the third book in the New Adult College Romance series: New Wave Newsroom
Follow the tour and enter to #win a $20.00 Amazon GC and a box of 80’s themed candy goodness! 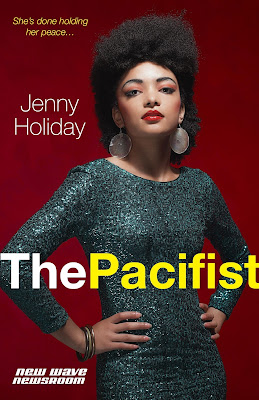 Laraline Reynolds has spent her entire life as a certified Good Girl. The perpetual peacemaker in her volatile, conservative family, Laraline promises herself that she'll spend her last year of grad school getting in touch with her inner rebel before she settles down and marries her family-approved long-distance boyfriend. But Laraline's Year of Fun quickly turns into something more complicated, and she finds herself at the forefront of a movement to change her college's sexual assault policy.

It's the Year of No Fun for Tony Bianchi. A fifth-year senior, he needs to graduate, so he's put a moratorium on his two favorite distractions: girls and photography. But when Laraline comes calling, needing some photos for her cause--and for her campaign for a seat on the college board of governors--Tony's resistance comes crashing down.

They both fall hard. But while Tony is ready to give it everything he's got, Laraline is afraid. She wasn't prepared for her one-year rebellion to lead her to the life she truly wants. In order to break free from her family, she'll need to do the scariest thing of all--follow her heart.

The Gossip Out Now:

Jenny Holiday started writing at age nine when her awesome fourth grade teacher gave her a notebook and told her to start writing some stories. That first batch featured mass murderers on the loose, alien invasions, and hauntings. (Looking back, she’s amazed no one sent her to a kid-shrink.) She’s been writing ever since. After a brief detour to get a PhD in geography, she worked as a professional writer, producing everything from speeches to magazine articles. More recently, her tastes having evolved from alien invasions to happily-ever-afters, she tried her hand at romance. A lifelong city-lover, she lives in Toronto, Canada, with her family. She is represented by Courtney Miller-Callihan of Greenburger Associates.

My Review of The Pacifist

The Pacifist is a “totally rad” addition to the New Wave Newsroom Series by Jenny Holiday!

Set in the early ‘80s, it tells the story of Tony, the former photographer of Allenhurst College’s newspaper Laraline, a grad student and daughter of a professor at the college.  A fifth year senior, Tony is determined to have a “ Semester of No Fun” and graduate this semester.  When he takes a photo of a couple kissing on campus he inadvertently causes problems for grad student Laraline.  Determined to have a “Semester of Fun” before settling down, Laraline has shed her peacemaker image and nickname, Dove, and is trying to escape some of the pressure she is under from her parents and probable fiancé to be perfect.  The two come together in more ways than one when they start working together on a project to raise awareness and get the campus to change the sexual assault policy.

This was a short and quick read that not only has a sexy, steamy romance, but also has a great message and as with previous books in the series raises awareness of important issues on college campuses in an interesting way without being too in your face about it.  It makes you think and can start a dialogue…something that was a problem for these students in the ‘80s is still a problem now, which is a little sad, really.

As for the chemistry between the characters, it was definitely there.  This book felt much steamier and sexier that the other two books to me.  I kind of wish there were more conversational interactions between the two and that the book was a little bit longer, but that’s just me.  And I’d love to know what happened to these characters.  In fact, I’d love to know what happened to all of the New Wave Newsroom series’ characters.

As with the other books in the series, this one was inspired by a song.  In The Pacifist’s case, it was Prince’s “When Doves Cry” and there is a scene with Laraline where the song comes into play.

As I said, I really enjoyed this book and its characters and hope to read more from Jenny Holiday, whether it is from this series or a new one.

*I received a Digital ARC of this book in exchange for an honest review.*