Today I am a stop on the Polaris blog tour!
You can check out my review for this interesting book below and enter to win a great giveaway! 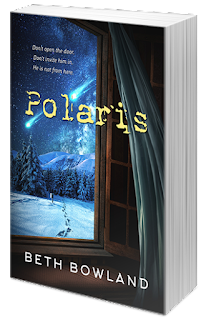 Have you ever been told not to talk to strangers? What about not letting a stranger into your house?  Well, Aaron probably wishes he had followed that advice.

After welcoming a stranger into his home, Aaron unknowingly sets off a series of strange events as he becomes a player in a bizarre, complicated scavenger hunt with dire consequences if he loses.

As Aaron plays the game he’s not sure who to trust or what’s going on as he encounters an interesting cast of characters. To be honest there were moments that I was as confused as he was. But I was so curious about what was coming next and if Aaron would complete his quest and outwit his opponent.

With its strange and eerie plot and setting, the book actually reminded me of an episode of The Twilight Zone (one of my favorite television shows).  Just like with the show, I was intrigued by the world and characters the author created in Polaris.  I thought it was an enjoyable read with some unexpected elements.

Pretty sure that the next time a stranger comes a knocking, Aaron will think twice before opening the door. I know, I would.

*I received a free copy of this book in exchange for a honest review.*
***

Here is a little more about this book and its author!

Bixie, Montana, is in the middle of nowhere, not connected to any place, and not used as a pass through to get anywhere. But one snowy evening, a lone visitor walking down an old country road changes 13-year-old Aaron Martin’s life forever. Aaron thinks he’s being a Good Samaritan by inviting the nearly-frozen visitor into his home, but he’s unwittingly initiated The Game. A group of Elders, known as the Council of the Legend, come together from time to time to enjoy a rousing event they playfully call “The Game.” Now, Aaron’s town is the playing board and he and his fellow townspeople are the players. The rules are simple. Win. Because if Aaron loses, he won’t just lose his family . . . he’ll lose his very identity.

Beth Bowland, a native Ohioan, has always enjoyed reading and creating stories of her own. As a child she devoured every book she could get her hands on and spent numerous hours at the library each week. She loves writing stories for tweens and young teens and her characters are often described as quirky and fun, but always relatable. When she’s not writing, she loves watching HGTV. She has one daughter and resides in Arlington, Texas with her husband, Phillip.

Be sure to follow along and stop at the other tour stops to learn even more about Polaris and its author!
Click here to see the schedule!

So have any of you ever participated in a scavenger hunt?
Did you win or lose?
Posted by Jennifer Y. at 3:00 AM