Blog Tour: Wear White to Your Funeral by Lisa Acerbo...Review and Giveaway! 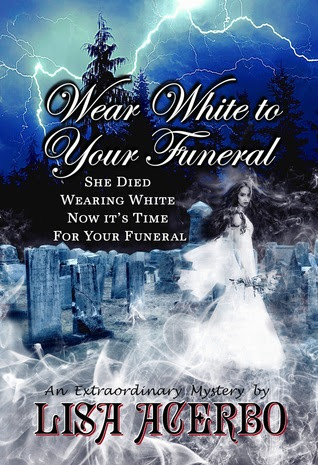 
Rory is your average high school senior. Or she was, until her mother banishes her to hell, also known as Trumbull, Connecticut. The small suburb with only a mall and movie theater, sure feels like the netherworld until Rory’s first day at her new school. That’s the day she meets Bowen, who begs her to join him on a class project. But when Bowen drags her to a graveyard after dark for research purposes, Rory wants to fly back home to Atlanta, or at least return to her aunt’s house unharmed and unmolested.
Nothing could go wrong, right? They talk, they laugh, and they wander among the tombstones looking for information on the local ghostly legend known as the White Lady. Then they have to run, but they cannot outrun a ghost. In addition to the ghostly woman, a half buried dead body leads Rory and Bowen into a deadly game of cat and mouse, but who is the killer? Is it human or something long dead and otherworldly?
The police are of little help, Rory’s aunt just wants her to remain safe, and Bowen, who she can’t stay away from, keeps finding ways to get her into more trouble than she has ever known. Whether breaking into a suspected killer’s house, being followed by a menacing ghost, or being stalked at school, Rory hopes finding the killer will put an end to the supernatural haunting. Before Rory can discover the identity of the killer, she is drawn into the mystery of the White Lady, which opens the door for some very real danger. 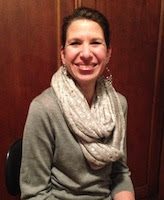 Author Bio:
Lisa Acerbo is a high school teacher and holds an EdD in Educational Leadership. She lives in Connecticut with her husband, daughters, three cats, and horse. She is the author of Apocalipstick and has contributed to local newspapers, news and travel blogs including The Patch and Hollywood Scriptwriter.


What starts as a spooky ghost story quickly becomes a thrilling murder mystery as well, when two teens stumble across a body in a cemetery...a body that shouldn't have been there that is.

Rory has just moved to town when she gets paired up with Bowen on a school assignment investigating a local ghost story.  The two soon get way more than they bargain for as their investigation into the legend of The White Lady becomes a murder investigation.  Their investigation leads them to some interesting and dangerous situations before everything is said and done and I'm still not sure why they decided to handle some of the things themselves.  It does make for one interesting book though.

Rory is an interesting character, forced to leave her school in Atlanta her senior year and move to live with her Aunt in Connecticut, she has a lot to be angry about and to adjust to. We don't learn a lot about Bowen's situation until later in the book, but they don't really have much in common. But Bowen becomes Rory friend from the moment they meet (and it almost seems like he is her only friend in town, too).  The pair only grow closer as they work together on their investigations.  And Bowen must have some awesome persuasive skills because he manages to lead her into some troubling and dangerous situations quite often despite her initial reluctance. And I am still not sure how or why she lets him.  It's an interesting relationship.


I did enjoy the spooky ghost story elements and legend of The White Lady and wish there had been more of that included, but I also enjoy a good murder mystery as well.  Wear White to Your Funeral would be perfect for fans of either genre.