Have a really interesting  audiobook to tell you about today...
Keep reading for more details, my thoughts, and several fun giveaways! 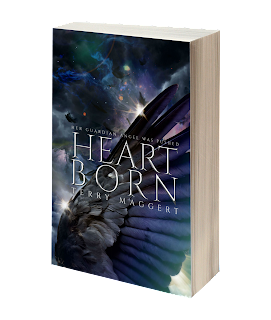 Her guardian angel was pushed. Keiron was never meant to be anything other than a hero. Born high above in a place of war and deception, he is Heartborn, a being of purity and goodness in a place where violence and deceit are just around every corner. His disappearance will spark a war he cannot see, for Keiron has pierced the light of days to save a girl he has never met, for reasons he cannot understand. Livvy Foster is seventeen, brave, and broken. With half a heart, she bears the scars of a lifetime of pain and little hope of survival. Until Keiron arrives. In the middle of a brewing war and Livvy’s failing heart, Keiron will risk everything for Livvy, because a Heartborn’s life can only end in one way: Sacrifice. Fall with Livvy and Keiron as they seek the truth about her heart, and his power, and what it means to love someone who will give their very life to save you.

Born in 1968, I discovered fishing shortly after walking, a boon, considering I lived in South Florida. After a brief move to Kentucky, my family trekked back to the Sunshine State. I had the good fortune to attend high school in idyllic upstate New York, where I learned about a mythical substance known as “Seasons”. After two or three failed attempts at college, I bought a bar. That was fun because I love beer, but, then, I eventually met someone smarter than me (a common event), and, in this case, she married me and convinced me to go back to school–which I did, with enthusiasm. I earned a Master’s Degree in History and rediscovered my love for writing. My novels explore dark fantasy, immortality, and the nature of love as we know it. I live near Nashville, Tennessee, with the aforementioned wife, son, and herd, and, when I’m not writing, I teach history, grow wildly enthusiastic tomato plants, and restore my 1967 Mustang.

Julia Whelan has appeared in many films and television series, most notably ABC’s Once And Again. After receiving a degree in English and Creative Writing at Middlebury College and Oxford University, Julia began narrating audiobooks. She’s recorded hundreds of novels across all genres and has received multiple Earphones and Audie Awards. She is repeatedly named one of Audiofile Magazine’s Best Voices and was Audible’s Narrator of the Year.

Heartborn is a wonderful story and I thoroughly enjoyed every minute I spent listening to it.

This was my first book by the author and I wasn't sure what to expect, but I enjoyed every aspect of the story from the unique characters and the intriguing storyline to fantastic world created in Heartborn.  Every element was so refreshing and interesting to me that I lost track of time as I listened to this engaging story.

Livvy, a teenager born with a rare heart condition, finds her world turned upside down when a handsome stranger walks into the library where she works. Keiron, a Heartborn guardian angel, has unexpectedly come to earth and knows he must protect Livvy at all costs.  However, things don't go smoothly for the pair or the family Keiron left behind. And as war threatens because of his absence, Keiron's family must decide what actions to take to protect themselves and their home.

Flipping back and forth between the two settings, we are offered a glimpse of what life is like post-Keiron's fall for both Livvy and for his family. And I absolutely loved it. I loved the character of Livvy and her toughness despite, or perhaps because of, what she has been through during her life. And her friendships and interactions with other characters are so interesting and fun as her personality shines through.  She's such a great character that you can't help but care for.

And the entire world that the author created with Heartborn, Windborn, Lightborn, and more types of angels and their homeland is so interesting. I enjoyed learning more about them and their history. I found myself looking forward to each scene in which we would visit and learn more while trying to understand the politics of this unusual world.

Terry Maggert's vivid descriptions and fascinating characters help create a story that lends itself well to the audiobook format. And Julia Whelan brought this world to life with her voice. She truly is a magical storyteller, in my opinion.  I became lost in the story as I listened to her soothing voice and enjoyed the life she breathed into the story as well as into each of Terry Maggert's characters.

I enjoyed each personality that she gave the wide variety of characters. I soon forgot that she was the sole narrator as I listened to each voice and conversation.  And as I mentioned before, I adored the character and personality of Livvy, and hearing her "voice" endeared her to me even more.

This book was so good and I am so glad that I got the chance to listen to it.  I now want to "read" it again for myself if only to savor the story and its characters at my own pace.

Heartborn has made me want to listen to more of Julia Whelan's audiobook work as well pick up more of Terry Maggert's books. I definitely recommend this one!


*I received a free audiobook in exchange for an honest review.*