Blog Tour: Just Kill Me By Adam Selzer...Q&A and Giveaway! 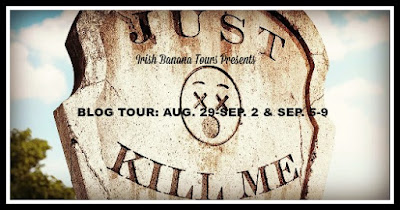 Welcome to the Just Kill Me Blog Tour!
Today I am pleased to welcome author Adam Selzer who was kind enough to answer a few questions I had for him about his book and other random things.
First here is a little bit more about this great book! 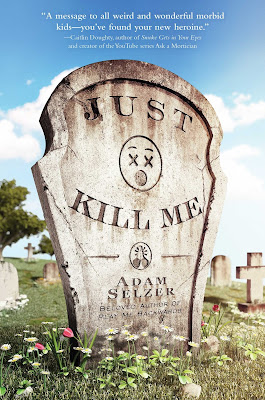 When the last letters in her alphabet cereal are D, I, and E, she doesn’t crawl right back into bed. When her online girlfriend won’t text a photo, she just sends more of herself.

And when she realizes that Cynthia, her boss at a Chicago ghost tour company, isn’t joking about making stops more haunted by killing people there, she doesn’t quit her job—she may even help.

But who is responsible for the deaths of prominent figures in the murdermonger industry? Could it be the head of the rival tour company? Or could it be someone near and dear to Megan?

Soon after she learns that she has an uncanny resemblance to a flapper who disappeared in 1922, Megan receives a warning she can’t ignore: the next ghost on the tour might be her…

Before we get to my Q&A with Adam Selzer, here is a little more about him...

His first book was HOW TO GET SUSPENDED AND INFLUENCE PEOPLE (now available in a "Now With More Swearing") edition, his next one is PLAY ME BACKWARDS (for satanic young adults), and his best known is probably I KISSED A ZOMBIE AND I LIKED IT, a Twilight satire that was not marketed as a satire.

He also writes the SMART ALECK'S GUIDE series and has published a bunch of Chicago history/ghostlore books.

You can also find him under the name SJ Adams, the name he used for SPARKS: THE EPIC, COMPLETELY TRUE BLUE (ALMOST) HOLY QUEST OF DEBBIE, which won a Stonewall honor and made the YALSA popular paperback list.

And now here is my Q&A with author, Adam Selzer...

Summarize the book in one sentence!
A ghost tour guide makes places more haunted by killing people at them.

In the book, Megan works for a ghost tour company. Did you take any ghost tours for research or do you have a favorite tour you've been on?
I worked year-round in the ghost tour business for 10 years, and still run them in October. I’ve never taken one outside of Chicago, though! It’s hard to watch other people do my same job.

Did you do any other research?
A lot, yeah. There are a lot of real historical mysteries in the book, some of which I’ve been all over the country researching. I chronicle some of it in the “Behind the Book” video series - http://rivetedlit.com/tag/just-kill-me/

What inspired you to write Just Kill Me?
There’s this bar called The Drawing Room on Michigan Avenue, and I killed a customer there with a lead pipe. It’s a really, really cool space, see; I mean, it’s like a Hogwarts common room. And I figured if it was haunted I could take tour groups there, and then maybe they’d give me enough of a discount that I could afford to drink there. I couldn’t find a historical murder, so I figured I’d have to roll up my sleeves a bit... It didn’t work, but right while I was bringing that lead pipe down, I had an “a-ha!” moment with a book idea!

Okay, okay.  It was a long process really - a lot of gathering of nuts and bolts from unsold middle grade novels (two or three of those), adult project ideas, and things that would occur to me while I was out working on tours.  Some of the scenes and characters cycled their way through three or four different books to get here!

What was your favorite part about writing this book?
The first scene that involves killing a person while wearing a gorilla mask - I wrote that one over and over. It was fine the first time but it was so much fun that I just kept doing it. Really all of the murder scenes were a lot of fun. This interview is going right in my FBI file, isn’t it?

There are quite a few interesting characters in the book. Any of the characters inspired or based on real people?
A little; most of them are sort of composite characters based on people I met over the years in the ghost biz. There was one character who was named “Adam Selzer” right until the minute I turned the book in. He dies.

I am a fan of ghostlore, what sparked your interest?
I wish I had a better answer, like “I never believed in ghosts, until one day....” but the real answer for me is Scooby Doo. Driving around in a van solving mysteries seemed like the job for me, and it’s pretty much what I do now, only without the van.

What's next for you?
I’ll have a book out called Mysterious Chicago in October; a nonfiction compilation of unsolved mysteries from Chicago history - mostly old enough that I can be snarky about them (and afford the photo rights). In April I’ll have a HUGE one about H.H. Holmes, one of our antique murderers who’s been in a lot of books, but never one that was particularly accurate. After that, I’ve got another middle grade book written and I’m working on a few adult ideas. And an album of songs about Chris Christie.

Oooh...the H.H. Holmes book sounds really interesting...
Thank you, Adam, for taking the time to answer my questions!
Readers, be sure to check out his book, Just Kill Me!

In fact, 3 lucky winners will have the chance to win their own copy of Just Kill Me!
Just fill out the rafflecopter below (US Only)!

Be sure to check out the other stops on the tour to learn even more about Just Kill Me and author, Adam Selzer!