Review Tour for The Chosen Knights (The Angel Knights #2) by Mary Ting!

Today I want to tell you about a YA urban fantasy series that I recently started reading...
Below you will find info about each of the books in Mary Ting's The Angel Knights series as well as my review for The Chosen Knights!
And make sure to read until the end...there is a giveaway!

First here is a little about The Chosen Knights...

About THE CHOSEN KNIGHTS (The Angel Knights Book 2) 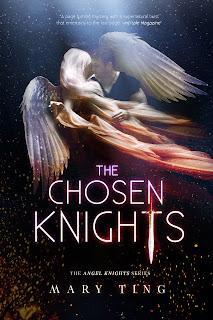 A page turning mystery with a supernatural twist that entertains to the last page! ~InD'tale Magazine


When teens go missing in Hawaii, a group of demon-hunters—half human and half angel—disguised as high school students, must leave Crossroads, the place where they reside. In a race against time, they uncover the mystery connecting the missing teens, which dates back to the era of the Knights Templar. However, when they discover one of the Templars passed down a book containing all the secrets and codes to finding a particular treasure, they soon realize this forbidden treasure needs to be found before Cyrus, the lord of the possessor demons, acquires it—a treasure which been safeguarded and hidden from him.

There is only one problem: the pages containing the clues leading to the treasure is missing. When the first page is found, Cyrus threatens to kill more descendants of the Knights Templar if it is not given to him by Friday the thirteenth. In the midst of threats and discovery, the demon-hunting angels find they are not alone when supernatural beings begin to reveal themselves. Can they put their differences aside and work together to solve the Knights Templars’ cipher? As they astral travel to the past, they witness a lot more than they have bargained for. And some things are better left unseen.

Add THE CHOSEN KNIGHTS to your TBR pile on Goodreads! 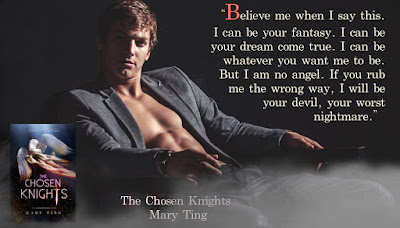 Now here is an excerpt from The Chosen Knights (Book 2) by Mary Ting:

“It’s beautiful.” I breathed. How this pendant, which was the size of his thumb, could give off so much light was unfathomable.

“Isn’t it?” Eli agreed, staring intensely at me while taking a step toward me.

My heart pounded mercilessly from his words. A hint of playfulness was behind his tone, especially since he wasn’t staring at his pendant but directly at me.

“Umm.” My face flushed. I changed the subject. “We need to get back to our friends. They’re worried about us, and they might need our help.”

He took another step, followed by my backward step. We continued that way for several steps more until I bumped into a tree.

“They’ll be fine,” he said. “Time stands still when we astral travel. It sounds strange, but we could be here for days, and only seconds will have passed in the present.” Eli stood before me with hunger in his eyes. The nearness of his six-foot-plus strong and masculine body caused fluttering feelings to erupt in my stomach.

“What are you, Eli?” I tried to break whatever was happening between us because God help me, I was falling.

Eli cupped my face tenderly with the palms of his hands. With his eyes deeply set on me, I imagined he could see right through my soul. “I am...everything,” he answered softly but sternly. Then he paused to brush his lips ever so gently on mine. “And you...are my girl with wings.” I was frozen in place, as stiff as the tree trunk supporting my back. The only thing that moved was my chest and my heart racing at the same speed as his. Just before he crushed his lips onto mine, he said in somber tone, “You will be the destruction of me.”

***
So what did I think of The Chosen Knights?
Here is my review!

A fascinating YA urban fantasy, The Chosen Knights captured my attention from the very first page and left me wanting more.

The first full-length book in The Angel Knights series features the children of characters from another Mary Ting series, Crossroads Saga.  I have not yet read that series, but I was able to follow along just fine so readers shouldn’t worry if they haven’t read it. Although, reading this book has definitely made me want to check out the other series so I can learn more about the parents’ story.  With that being said, I do highly recommend reading the prequel to this book The Angel Knights, however, as it explains and sets up the series and introduces you to some of the main characters, such as Lucia and Zach.

Half-human and half-angel, Lucia and Zach have lived in Crossroads, the place between Heaven and Earth, their entire lives training to become Venators, or demon hunters.  Now, along with their uncle, they must venture into the human world to investigate the suspicious disappearances of teens in Hawaii.  As Lucia tries to adjust to life as a human teenager she begins to suspect that her family may not be the only supernatural beings in town.  They soon find themselves dealing with clues and legends from the past while trying to protect innocents from an evil demon lord. Along the way, they find allies in surprising places and Lucia finds herself experiencing emotions that are foreign to her…like love.

Lucia is an interesting character. Only half-human, she is not used to the emotions, thoughts, and everything else that comes with being a teenager in the human world including falling in love.  Everything about the human world is new to her and she has to adapt, but sometimes doesn’t really understand the world and why people acted they way they did.  She has a kind heart and is, at times, too trusting which leads to some sticky situations for her and her loved ones.  She also has the tendency to act before she thinks, which is not really a good thing considering the consequences of battling demons.  This is something that not only frustrated me, but also frustrated her Uncle Davin (a character that I absolutely adored, by the way…he’s like a big kid).  But I look forward to watching Lucia grow and learn further as the series continues.

In addition to the characters, I found the different types of demons as well as the other supernatural elements included in this story quite interesting.  It wasn’t your typical Angels vs. Demons, good vs. evil story and I liked that. There was a lot more to it including legends, different traits, distinctions, etc. The different legends and stories that Lucia and her family come across during their investigations were fascinating.  From the Knights Templar to legends of the blue moon to the history of the creation of the first demons, everything had a reason for being included in the story.

The story had a few unexpected (and a few expected, if I am being honest) turns. Because the book ended with a bit of a cliffhanger, I am eagerly looking forward to the next installment in this series to see what happens next!


*I received a free copy of this book in exchange for an honest review.* 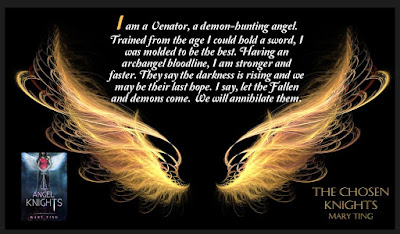 About THE ANGEL KNIGHTS (The Angel Knights Book 1) 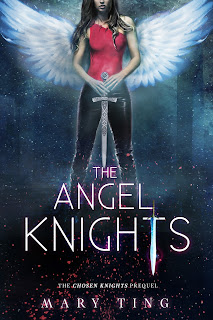 Michael and Claudia’s decision to move back to Crossroads was to keep their children safe, but they can’t escape who they are. Their children, Zachary and Lucia, were destined to be demon hunters—Venators. From the age they were able to hold a sword, they were trained to become the best and to ensure they would become leaders one day.


All is peaceful throughout the land until the Fallen and demons’ presences were felt in the between and on Earth. As the Venators investigate these locations, they will quickly learn how dangerous their lives are. Hearts will be broken. Teammates will lose their lives. And they will face obstacles which will test their faith.


As danger grows, the fear of fallen angels and demons regrouping has the Divine Elders on pins and needles. Now, Zachary and Lucia, along with Uncle Davin, must prepare themselves—mentally and physically—to live on Earth to investigate where the focal point of evil resides before it’s too late.

Add THE ANGEL KNIGHTS to your TBR pile on Goodreads!

About THE BLESSED KNIGHTS (The Angel Knights Book 3) 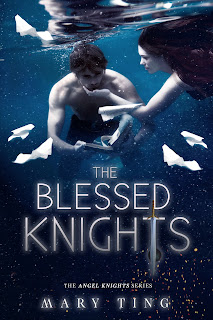 Eli, Lucia's half-demon love interest, has been stabbed with a true-cross dagger and captured by Cyrus, master of the possessor demons.

The Chosen Knights must work together once again not only to save Eli, but also to decipher a clue to find the second missing page of Jacques de Molay's journal. Meanwhile, Uncle Davin informs Crossroads Divine Elders of the danger ahead and learns there is much more to fear.

Countless children are being taken from all over the world to be turned into demons.

Michael, one of the Divine Elders, has no choice but to intervene. The Chosen Knights track down Mortem, the demon who is the key to finding Cyrus, and learn they must travel deep into the pit of a Hawaiian volcano.

When they astral travel to the past in search of a clue and follow Jacques de Moley to Roselyn Chapel in medieval Scotland, what they find will rewrite history.

Add THE BLESSED KNIGHTS to your TBR pile on Goodreads!

International Bestselling, Award-Winning, Author Mary Ting/M. Clarke resides in Southern California with her husband and two children. She enjoys oil painting and making jewelry. Writing her first novel, Crossroads Saga, happened by chance. It was a way to grieve the death of her beloved grandmother, and inspired by a dream she once had as a young girl. When she started reading new adult novels, she fell in love with the genre. It was the reason she had to write one-Something Great.

***
CELEBRATE THE REVIEW TOUR WITH A GIVEAWAY!
1 Grand Prize: $20 Giftcard to Amazon
2 Runner-Ups: Digital Edition of Any Backlist Title from M. Clarke or Mary Ting

a Rafflecopter giveaway
Posted by Jennifer Y. at 6:38 AM