Blog Tour: All Laced Up by Erin Fletcher...Review and Giveaway!

Love super cute YA Contemporary Romances?
Then you'll love the one I am sharing with you today!
Keep reading for more info as well as my review of this sweet book!
Plus, there's a giveaway! 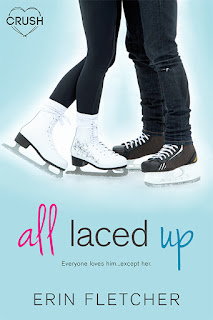 Everyone loves hockey superstar Pierce Miller. Everyone except Lia Bailey.

When the two are forced to teach a skating class to save the rink, Lia’s not sure she’ll survive the pressure of Nationals and Pierce’s ego. Not only can’t he remember her name, he signed her bottle of water like she was one of his groupies. Ugh.

But if there’s one thing Lia knows better than figure skating, it’s hockey. Hoping to take his ego down a notch—or seven—she logs into his team website under an anonymous name to give him pointers on his less-than-stellar playing.

Turns out, Pierce isn’t arrogant at all. And they have a lot in common. Too bad he’s falling for the anonymous girl online. No matter how much fun they’re starting to have in real life, she’s afraid he’s going to choose fake-Lia over the real one…

Disclaimer: This book contains a swoony hockey player (and his equally swoony friends!), one-too-many social media accounts, kisses that’ll melt ice, and a secret identity that might not be so secret after all…

Erin is a young adult author from North Carolina. She is a morning person who does most of her writing before sunrise, while drinking excessive quantities of coffee. She believes flip-flops qualify as year-round footwear, and would spend every day at the beach if she could. She has a bachelor's degree in mathematics, which is almost never useful when writing books.

With its likeable characters and fun theme, All Laced Up is a sweet romance about two talented and dedicated teens helping each other to overcome their fears and finding love along the way.

First, I have to confess that I can count of one hand the number of times I have set foot (or rather skate) on the ice. My knowledge of figure skating and hockey is limited to what I have seen on TV and in films.  Every 4 years I watch the Olympics and in my mind I am a graceful young lady who is completely capable of gliding across the ice or I’m a fierce competitor scoring the winning goal rather than the wobbly-legged girl clinging to the boards that is my reality.  And I live for movies like The Cutting Edge (“Toepick”), Ice Princess, Ice Castles, The Mighty Ducks and more.  So when I read the description for All Laced Up, I knew I had to read it and let me tell you, it definitely didn’t disappoint.

While very reminiscent of The Cutting Edge as the worlds of figure skating and hockey collide, there are many differences, especially the plot.  In order to help keep the local rink that has been their home away from home from possibly closing, Champion skater Lia, and star hockey player Pierce find themselves teaching a beginner’s class to a bunch of little kids.  Both had their own motivations for volunteering, motivations I found touching.

However, motivations aside, Lia doesn’t like the Pierce that she sees and thinks she knows. And Pierce doesn’t even remember Lia’s name despite the fact that they have gone to the same school and skated at the same rink for years.  But as Lia anonymously begins to offer Pierce advice on his hockey team’s online forum, she begins to get to know the real Pierce and  realizes that there is more to his story than meets the eye.  Pierce is intrigued by his new online friend, but he is also finding himself intrigued by Lia, which surprises him as she is not his usual type. And he knows there is something Lia is hiding from him and is determined to get it out of her.

Both Lia and Pierce have secret fears and things that have been holding them back making them afraid to take chances in their respective sports and in life.  They are both afraid of failure, which is something that many readers will be able to relate to even if you are athletes.  Their partnership or rather budding friendship, I guess you could say, is very beneficial for both of them.  It is so nice to see them grow as individuals as well as a couple.  They are so good together and for each other, you can’t help but hope that they work everything out and succeed as a couple and as well as individuals.  Their interactions are highly entertaining and very insightful for two teenagers. Also, there is very little drama, which is a plus in my book.

I was pleasantly surprised by the fact that I was able to read this story in just a short amount of time.  I didn’t want to put it down.  The pacing, plot, characters, everything, make for a lovely read that is entertaining and makes you want to keep reading.  It’s a nice leisurely read with a sweet and likeable couple with admirable qualities…and yes, it made me wish I could ice skate.